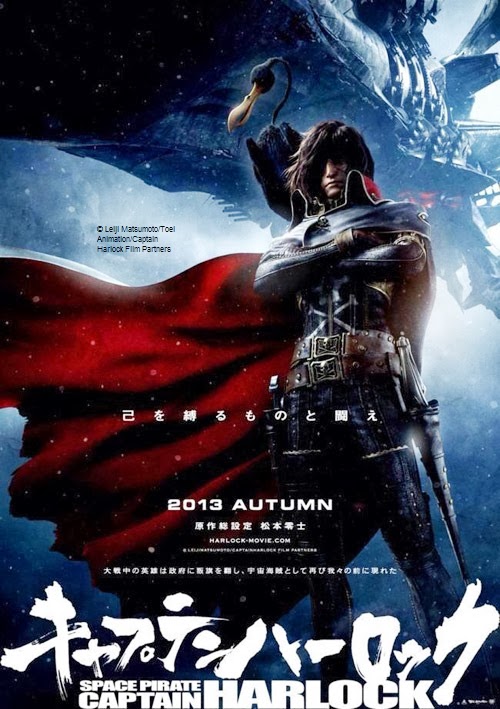 It is, according to the opening narration, either the far future, or the distant past.

Humanity has spread out from their home world of Earth, 500 billion souls living on countless worlds. However, their time is ending. The human race has exhausted the galaxy's resources, and its own will to survive. Mankind limps home to Earth, to live its final days where it started. However, tiny Earth can not hope to support all that arrive. Humans, as they tend to, go to war for the right to live on the blue ball. In the end, Earth is forbidden to all, overseen by an almost religious organization. Earth is held up as an example of heaven, for humans to long for as they slowly fade away.

One man will not accept that.

Harlock is a character from the 1970's, perhaps the most iconic in Japanese animation. Created by Leiji Matsumoto, who provided the character designs for Space Battleship Yamato (Star Blazers), he is an emblem of honor and defiance in the face of defeat. The rest of humanity may have accepted their fate, but by the gods he will not. His original stories reflected a wish fulfillment of a defeated Japan, as he turned his back on an Earth which accepted alien occupation and kept fighting. How was this updated?

Well, first, I surprisingly enjoyed it visually. Done in CG, which I usually hate for anime (Appleseed turned me right off them), they captured the original character designs rather nicely. At $30 million it's one of the most expensive films the studio has done, and for that it looks much better than the live action Yamato film I reviewed before. It also FELT like a Matsumoto story. I do not know what involvement the 79 year old creator had on the project, but those involved clearly loved his work.

As for the story... well, it too is old school in that it really makes little sense. Things happen, and Harlock looks cool as they do. Then a long period of nothing happening as they discuss philosophy, Harlock again looking cool. A point against the remake. However, I must say that never really bothered me. I was engaged with the characters. This was partly helped by some real question as to if our Pirate Captain in right, if his honor is fighting for a cause truly worth the horrors he will cause. This is new for the character, yet does not break our image of him.

I am not going to say the film it GOOD. It is interesting. Definitely the type of film many will hate, and justifiably so. It only made back half its budget world wide, but despite what the studio obviously wanted I'm not sure popularity is what the creators cared about. There's something to be said for that.

It's available on Netflix.