Friends In Your Head | Forums → Off Topic → Saga. A comic

Are any of you guys reading Saga by Brian K. Vaughan and Fiona Staples? It's one of the best series I've read in a very long time. I first came across Vaughan about five years ago when I started reading "Y The Last Man" So yeah, Alana and Marko are basically on the run from bounty hunters, two armies and a Robot Prince on a spaceship that's actually a tree.

and their baby sitter is a ghost. 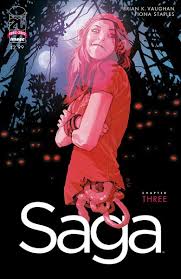 None of the elements should work but some how come together when put in the same comic.

I got Trey book 1 for Christmas.  Paging Trey?

Saga is my absolute favorite monthly comic right now.  One of the few I still by in singles (versus trades).  Staples' art is fantastic - the piece she did on her process a few issues back was so cool.  I'm gushing a bit.  I hope it gets an oversized hardcover treatment in the future like Darwyn Cooke's Parker or I Kill Giants.

Y: The Last Man being my favorite comic ever, it's a given that I'm gonna read this at some point. I'm really just waiting to get into it so that I can binge through as much as possible in one sitting.

Friends In Your Head | Forums → Off Topic → Saga. A comic