< Mode: Shelter in Your Head > < Day: 080 > A survey of lottery winners indicates that the joy of winning wears off within about three months.

Short version: I need someone to do three CG shots to match to live-action footage for my starfighter movie.

Long version: Hey folks, I'm in need of some help. Damien Valentine is handling the majority of the exterior shots of this movie, but the software he's using - iClone 7 - isn't your standard CG software, and he's having issues matching a few shots to footage. I was hoping that, if I provide the requisite models, someone would be able to step in for three shots and somewhat match the style Damien is working on.

(Using gifs for these for now, obviously can export full 1080p stills and movie files for those anyone interested in taking a stab.)

Damien says he'll be able to export the fighter as an FBX file. The small asteroids they're flying through are a particle system built into iClone, may not be able to get that to the artist but it's the least of my concerns.

Now, the three shots. In this first one, Davis (played by Writhyn - say "Hi, Writhyn!") levels out from a turn and the camera settles in front of him.

I'd love if we can keep CG in the shot all the way through, but I'm also open to starting with the fighter with the opaque cockpit and dissolving to the live action shot as we get close. Think the reverse of this following example, from the Tie Fighter fan anime.

The next shot is that in reverse - starting with live-action then dissolving out to the fighter pulling away from the camera.

The final shot is a less dynamic one as far as movement goes. Forgive the garbage matte while the shot is a stand-in; the fighter rises into frame.

We did a test comp of this one as a still frame but motion still eludes us. 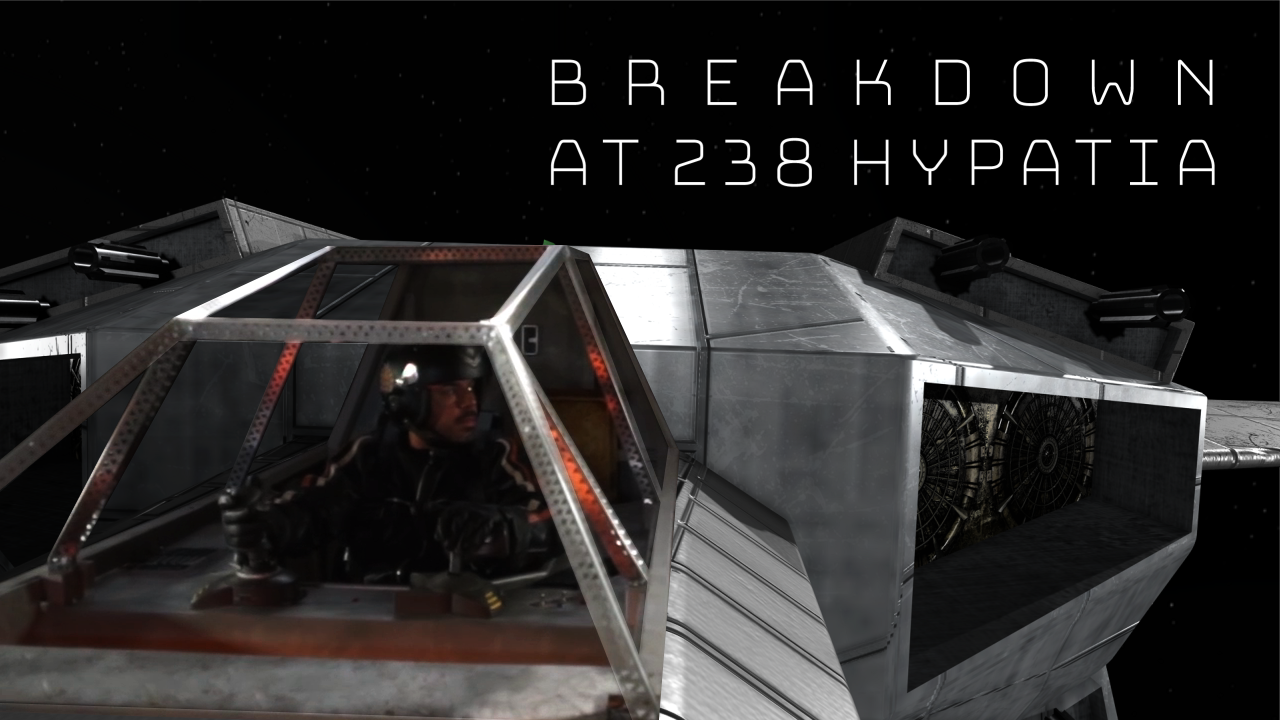 At this point it was over a year ago that I shot the live action, but I can get the focal lengths to the artist (either 20mm or 28mm) and try to estimate my distance to the subject. I'll take care of the actual compositing (rotooooo) so I would "just" need a plate with the CG model.

Again, let me know if you're interested in taking this on, or anyone you know might be, and I'll try to facilitate getting materials passed around to make it as painless as possible.

Hmmmm. Tracking is gonna be kinda difficult, no?

Yeah, it's not nothing, but it's an 'either you know how to do it or not' thing, and a couple of folks around here do.

Unfortunately, I'm not set-up [or, honestly, knowledgeable enough] to handle it myself, at the moment, and it looks like the other contenders in DIFworld have their hands full, too.

(That said, Boter, all is not lost: if y'all are capable of paying someone for the gig, I can still ask around a bit and see if any of the 'pros' I know would be willing to knock 'em out for ya. These shots can definitely be done, in any case; it's just a matter of finding the lowest bidder. 'Free' is preferable to 'not,' of course, but... y'know. Options.)

Noted, Teague. I can't afford a proper maying amount for the shots (a hundred bucks as a thank you maybe) but I appreciate that.

In talking with Regan (who contacted me last week and who I haven't followed up with), I realized that of the three shots, only one really NEEDS to be a comp of live action and CG, and that's the third one. The other two, if they don't get done, I can get close enough with just a hard cut.

I can't take care of the whole shots, but I'm 80% sure I can 3D track the 3 live shots and get a CG camera out of them without any major trouble.