Thread for being deeply, non-fatalistically worn out about something (Page 5 of 5)

Friends In Your Head | Forums → Off Topic → Thread for being deeply, non-fatalistically worn out about something

(Damn, this doesn't really work when the GIF I'm replying to is on the previous page.

This gif is a very complicated joke, and I don't even know what I mean by it, so let's examine the layers:

3) But then, of course, this is all complicated by being a co-opted message from a Disney film. (A Disney sequel!)

4) My favorite aspect of all:

An accurate description of our gif-represented situation is: "we are sliding inexorably into a pit of boiling trash."

Yes. All the yes.

Remember that kids these days didn't grow up with cartoons, and more likely cartoons will be a niche product. I don't like that fact at all, but it's how it might come to pass. As such, getting some classics like Lion King, Aladdin, Mulan, Beauty and the Beast, will, if not be as great as their cartoon counterparts, at least have a younger audience grow up with great Disney stories, and be just as nostalgic about those in 20 years.
It's not a bad thing, really. It's just that we grew up with what we now call masterpieces, the same way they will grow up with what they might come to call masterpieces in the future.

The problem I have with these remakes is not that they suck. I still haven't watched a single one of them, and I don't think I will, but they're just remakes. Taking the same story, and in some cases, the same voices(I'm looking at you, James Earl Jones), and the same music, and just applying it to a live-action or CG film instead. I'm not opposed to the idea, I just don't understand why it's neccessary to remake a film at all, unless it's something that clearly didn't have the budget to be what it wanted to be 30 years ago, and now is done "correctly". Most of these Disney classics didn't lack the budget per se, but were animated for reasons. Now, they have the budget they "deserved" back in the day, and that leads us to live-action or CG. Which is probably what they would've done 20+ years ago, if the tech was there, and we'd probably love it as much now as we did then if they did.
Toy Story is a great example, because it was what, 3 years after the Lion King, and a CG film. It did amazing back in the day, but we're not remaking it now looking better, because it was CG as good as they could back then, and while the sequels are not needed, they do get more impressive, technically each time.

I don't know. I don't have a problem with remakes, I just tend to not watch them. But I'm happy the next generation will, because they may not watch the older movies simply "because they're old". I'm quoting my 13 year old son here, who was hesitant to watch Back to the Future because it was old(but loved them), and if that's anything to go by, it's nice to know that even though our future generations may not watch what we did, they'll still love the stories they told, through a new media.

I'm kind of the exact opposite—I think it's horrifying that we're furthering a media-illiterate culture in which old movies are erased and just repackaged for newer generations. For a number of reasons:

1.) It's pretty much ruined original storytelling on a big scale. What are kids these days growing up on in terms of hit movies? Outside of original Pixar movies and . . . Frozen?, it's all repackagings of stuff their parents grew up on. Disney remakes, superhero adaptations, Star Wars sequels, new Harry Potter movies. Instead of having the chance to develop their own cultural loves which they then pass on to kids, they're getting fed this regurgitated mass of our nostalgia catering to us.

Not that I'm against showing kids movies you loved growing up at all! But there's a fundamental difference between doing that in an environment where they have their own movies to fall in love with and making it the only game in town. Especially when the new versions being shoved in their faces are, like that Lion King clip, devoid of care, artistic intent, and resonance.

2.) The fact that you showed Back to the Future to your son and he loved it is proof positive that new generations showing distaste for "old" media isn't something that's inevitable. It just takes an environment that's willing to expose them to those old things with respect and enthusiasm, the way Eddie's dad did with him when he was growing up. Making inferior versions of the old media to cater to modern trends and then selling it all over again isn't cultivating a respect for old stories; it's implicitly saying they're "inferior" and need to be updated to suit the latest fashion, whether or not that's actually better. It's not actually helping people to love old stories, it's exacerbating their being steamrolled over. It's as if someone were to try to remake Citizen Kane in color with 3D and shaky-cam and then say "All we're doing is helping this story find its footing with a modern audience!" All that does is condescend both to the modern audience and old movies.

It's pretty much ruined original storytelling on a big scale. What are kids these days growing up on in terms of hit movies? Outside of original Pixar movies and . . . Frozen?

I don't think you're wrong, but it's also not anything new. You grew up with the Prequels and turned out just fine!

But obviously, you're right. These kids today don't even know they're born!

Oh, it's definitely true that piggybacking off old media isn't a new thing, it's the saturation of it now that I take issue with. Yeah, I grew up with the prequels, but that was also the age of Pixar releasing original stories left and right, the tail end of the Disney Renaissance, Dreamworks' first stages (for better or worse), the Spy Kids series, and a bunch of other stuff. Not to pass judgment on whether or not all of that was good—I'm not a fan of the latter two bits I mentioned—but there was a plethora of options. (And that doesn't even count stuff like LotR and Potter, which were adaptations but with the exception of the dubious LotR animation way back in the 70s had never been put on the screen before.)

And sure, a lot of the Disney Renaissance stuff drew on pre-existing stories, but the difference there is they indisputably made them their own thing—drastically redrawn plots, the musical format, etc. With the exception of Maleficent, the new Disney remakes started out trying to tell new stories to varying degrees, but then Beauty and the Beast got them a huge gross for being a direct remake of the old movie with some window dressing, and now Aladdin and The Lion King have gone the same way, and The Little Mermaid looks like it will be too. The approach is just "That thing that made me happy when I was a kid, exactly, but with just enough change that I can pretend it's a new interpretation."

EDIT: Also, I really don't wanna come off as being "These kids today, get off my lawn!!!" and hope that's not the vibe I'm projecting. The kids aren't at fault at all—it's the way the system currently works that's at fault, as well as all of us adults to some extent for feeding it.

"That thing that made me happy when I was a kid, exactly, but with just enough change that I can pretend it's a new interpretation."

I just miss films that actually end. I was saying to Owen that ironically one of the few places you can get a stand-alone blockbuster these days is the Star Wars spin-offs.

Could it be done right somehow?

Depends on what you're asking tbh. If you mean a remake of The Lion King, sure—as long as it's done with the intent of actually telling its own story and having its own meaning rather than being largely the exact same film. If you mean the photorealistic animation . . . nah, I don't think so. It's so completely at odds with the premise of the story. Theoretically, you could do a movie with CG photorealistic lions and have it be great, but you couldn't have them talk or act unlike real lions in any way without the uncanny valley setting in. It's just such a fundamentally misguided notion, and Favreau has admitted as much in interviews and said they tried to cover the lions' mouths as much as possible because the lip-sync was so broken.

That said, you could certainly improve upon the clips we've seen. Intentional framing, more vibrant color grading, anything to make it less listless and drab.

Just reading those articles about how they "shot" the thing using VR like uuuuuuugh... so not only did you guys not want to do actual framing, y'all just built the scene and then "discovered" your shots as you went along. The exact opposite of how a movie like the Lion King should be shot.

The only thing about this movie that doesn't make me hate everything is this photo: 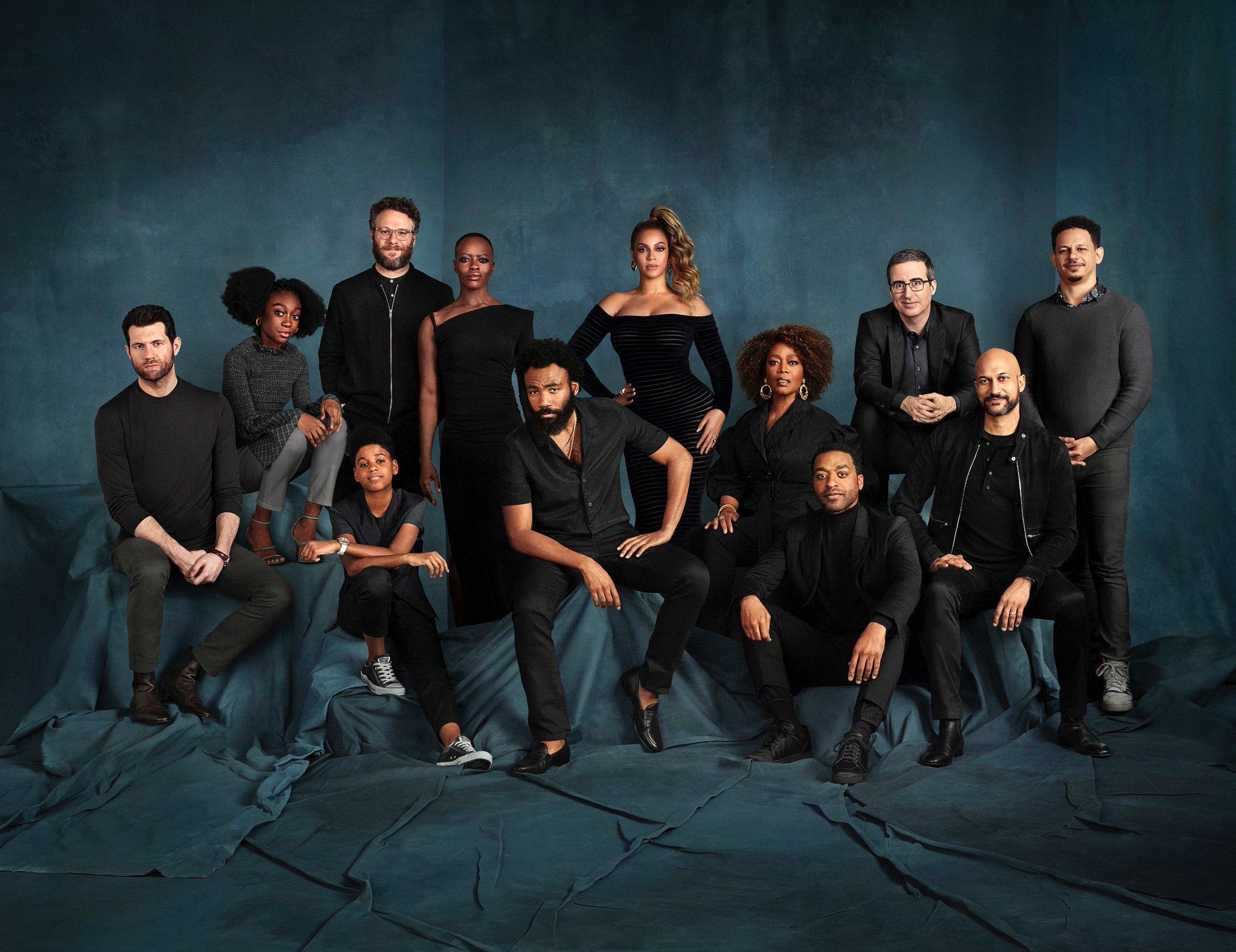 Me desperately clawingly trying to find /a/ silver lining!? Why I never....

Friends In Your Head | Forums → Off Topic → Thread for being deeply, non-fatalistically worn out about something