"...he was dark and sleek, like a manicured shadow and taller than any man I'd ever seen, with eyes like lightbulbs. He starred at me and he said: Embrace the fear Kassandra, fear is love.... fear is love."

The Official Lyric Video for Jamie Woodfin's newest single You Were That Night!

As I say in the video description, this was an EXTREMELY quick turnaround project, so it's almost entirely bodged together to make it work.

I thought I had posted these all before, but maybe they got lost in the GoDaddy explosion.

Anyways, I've gotten to do some work with Jay Foreman over the past year or two, and his latest episode of Unfinished London just went online, and I have a couple shots in it.

Other shots I did for Jay:

/\ Hair whitening for the old guys.

/\ Built a cleaned up version of the background for the opening shot.

Love Jay. Cloe too. This is very cool.

Man, I only knew about your work on the "Where does London stop" one. Will definitely check out the rest!

New Unfinished London just dropped that I have a few shots in again!

More of just a technical fix-up, but did some work on the shot at 27 seconds to time stretch it out without making it look like it was time stretched out.

BDA HOW EVER DID YOU COME TO WORK WITH NOTED VERY COOL PERSON JAY FOREMAN.

Oh dude, it is like, the, most quintessential "freelancer in the internet age" story.

Jay was working on one of the episodes in, I think it was 2017(?) And threw a Premiere question out to the world on Twitter, which I answered cause I'm cool like that, and we had a bit of back and forth problem solving, and at some point I mentioned I was a VFX artist and what-not, and he was like "oh reeeaaaallllly", and the rest as they say, is history.

Awesome. We are Foreman fans in this household.

Like, we sing the "Map Men" theme a lot.

(For our shame, we do sing the lyrics on the proper beats of the song, though.) (This joke may be a deep cut.)

Nah, I got it. I go on Foreman kicks now and then, and am super appreciative, BDA, when you post another video you helped on because YAY then I get to watch a bunch of stuff again.

Cave Puppet Films (Rob Jacobsen's production company; Rob and I made Skinner and a few other projects over the years, for reference) just publicly released their latest short film Tessellate (after doing the festival rounds) that I did a few bits and bobs of VFX on. Primarily the handheld tablet UI.

Put together this fun little video for the Red Deer Museum and Art Gallery back home:

Another video done with the Red Deer Museum + Art Gallery. A fun little baking "competition" showing 2 different shortbread recipes from 2 staff members at the MAG. Easily one of the most complicated project I've done in a long while (that wasn't my own) just in terms of the sheer volume and variety of footage, and not having shot it myself. But it was fun, I think it came together pretty well.

Finally getting around to using all of this free time (HAH) to do something that's been on my to-do list for a while, setting up an actual Artstation public portfolio. More to come but for now this piece just went up: https://www.artstation.com/artwork/Aq49ky

Oh and a few other things went online: I've been working with the Museum back home on their Exhibit" Powwow! Ochiwin: The Origins", and exhibit showcasing and telling the history of some of the major Powwow dances and dress' in the area. I learned a ton editing these and Patrick and Marissa, the exhibit creators and co-curators, are both incredibly passionate about the subject.

(If anyone happens to know any museums or places looking to host a travelling exhibit about Powwow let me know, I gots the connections)

I did a thing.

A while back I made the decision to completely, from the ground up, re-build one of the BIG scenes in Innervate, because among other reasons it was pretty terrible. It was more or less the scene that I forced myself to do during the "oh fuck my life literally just got flip turned upsidedown *inserted assorted screaming here*" moment that happened in the first little bit of 2018, when I was totally creatively burnt out, but felt like I needed to be doing /SOMETHING/. So yeah, I didn't know what to do with it, it just wasn't where I really wanted it to be and I wasn't good enough to get it there.

Now, 3 years later in a way better place personally (And the fact that I can say that on month 12 of lockdown in a city I just moved to during a global pandemic and sincerely mean it, is not an irony lost on me), having finally gotten to a point where I am seeing my skill get off that long damn plateau between skill and ability to critique and I'm starting to really see my stuff improve pretty dramatically means I know I can get that scene to where I want it.

Sorry, it's late, I've had some champagne to celebrate finishing this thing, and I'm in the mood for waxing poetically... so ANYWAYS, I just finished the rebuild on this one (which is the primary focus of the scene it is basically a character) and I'm pretty damn happy with myself. Not only is it infinitely closer to the original idea I wanted to go but wound up having to steer away from because I couldn't make it work back then, but it's also WAY more technically solid in terms of how it's rigged up and the tools I gave myself to animate with. It can actually bloom and open up within this one rig which is something I could never get figured out last time which is kinda crazy, AND it renders it like 1/12th the time which is bonkers. 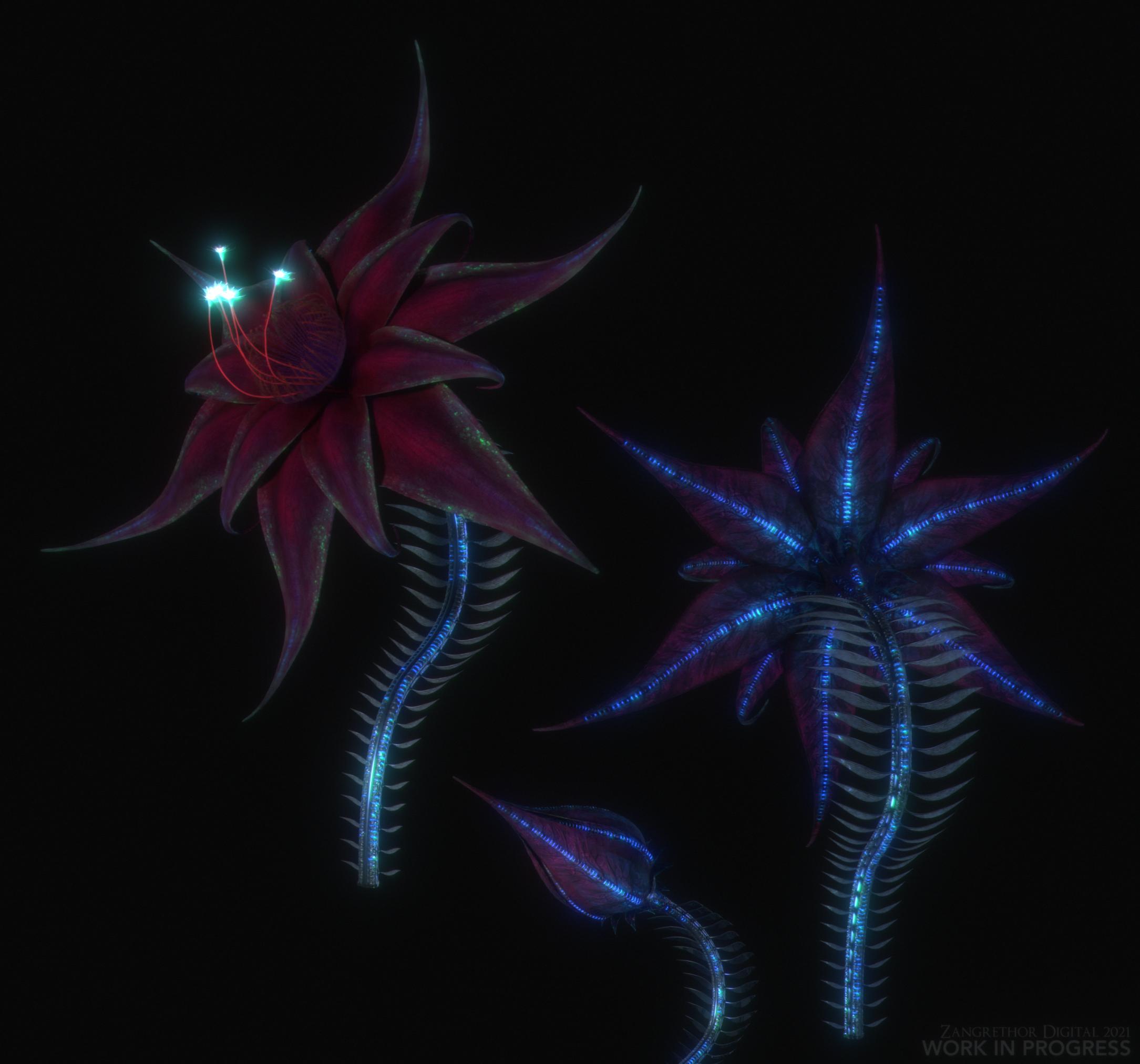 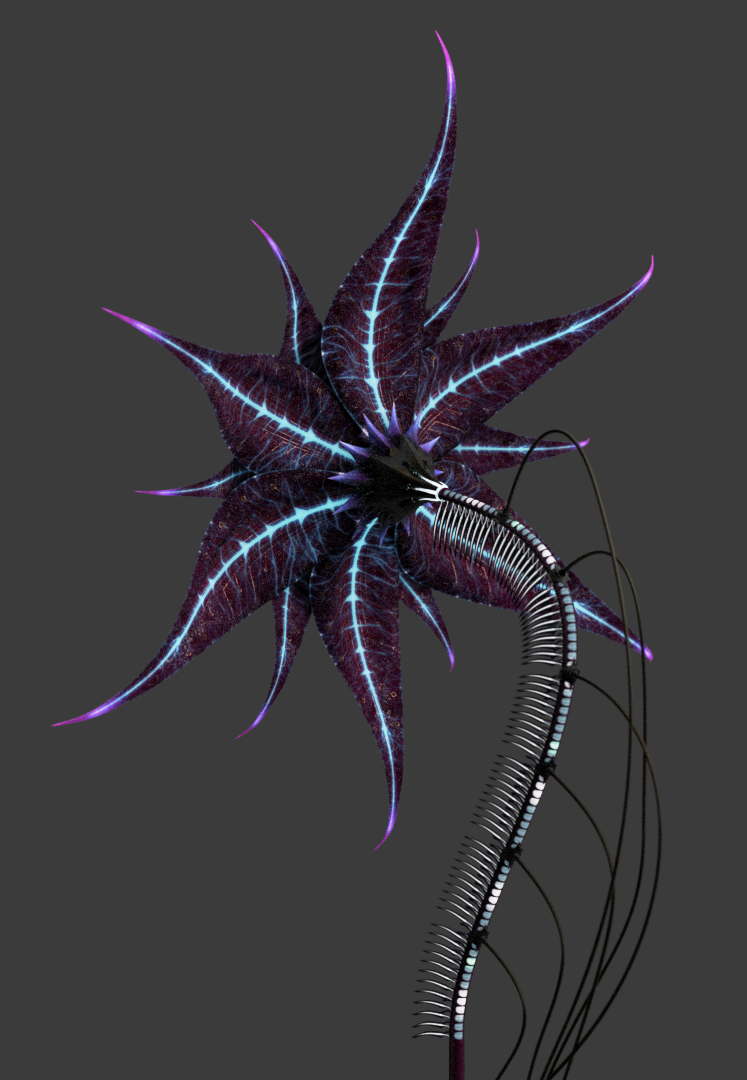 DUDE. That thing is BADASS.

I was desparately trying to make fetch/Hyacinth happen too

Lol, thanks guys. It doesn't really have a name itself for *insert complicated world building reason here*, but I've taken to calling the Audrey III for, uh, obvious reasons.

Daffokill is pretty fantastic though.

I mean we’d have the album art covered