Hey y'all.  Recently someone asked about new episodes of Documentality over at GeekNation.  They are coming, I swear!  Just this morning i had a call with the GN peeps about booking a few guests.  I'll also be covering the LA Film Fest with a shiny press pass.  So yes, that is very much a thing and its still happening and it is great.  But yes, there's been a notable absence, and I can finally explain why.

For over a year, I had this odd relationship with Legendary Digital Networks (comprised of Nerdist, Geek & Sundry, and Amy Poehler's Smart Girls).  Every few months, I went in, pitched a bunch of shows which they loved, and would hear back that everyone loved them, but they couldn't afford it.  They were super nice, I got invited to parties, met a lot of the folks behind the scenes.  Then I get a call to come meet with the VP of LDN and the GM of Geek & Sundry.  I think it's about one of my ideas, and they made it clear it was about something bigger.  Something I can't talk about.  Something you will all hear about later this year.  But before that big thing, they wanted to also hire me for three weeks to produce their Open Beta week.

What is Open Beta?  It is a week long event on G&S Twitch channel where we're trying out 5 new show ideas, Monday through Friday.  When I was hired, they literally handed me one sheet of paper, with 5 working titles and loglines and said, "Make this."  I was given a budget (the size of which I shouldn't say) and three weeks to structure, cast, budget, hire crew, and test the new TriCaster 8000 we'd be streaming through.

It was...intense.  But we got it done and we are now onto day 3 of the week.  Monday we had The Scavenger a Twitch chat room controlled scavenger hunt where the audience guided a player to complete a damn complicated series of puzzles, which they totally did.  Yesterday was Otak-ing Heads a chat show about the world of Anime hsoted by renown voice actor Todd Haberkorn.  Our guests included Michelle Nguyen and Matthew Mercer from Critical Role.  The audience really seemed to go for it.  Today is Gastro Geek where two players square off to create a food sculpture from bizarre items.  Thursday is Game Engine a news show focussing on all things gaming (video and tabletop) and technology, and where they intersect.  Friday is Max Hit Points a fitness show dressed up as a LARP.  Hosted by Blair Herter and powered by Nerdstrong Gym, they take an adventurer on a quest through fitness, where the workout is designed around a D&D character class, and your calories burned equate to a damage roll against an epic foe.

So please, give us a watch.  All shows air 5:30 pst on twitch.tv/geekandsundry. 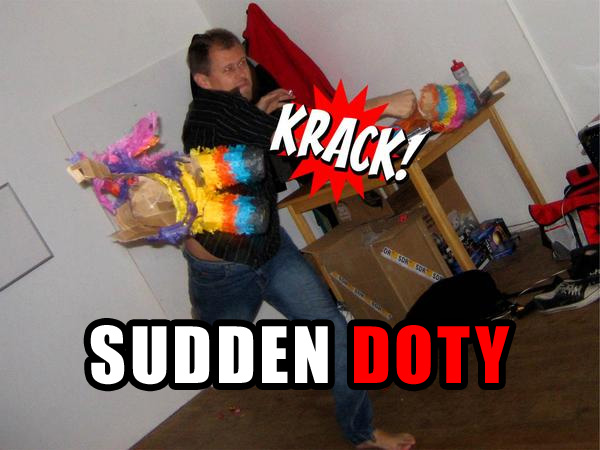 Tricaster...?! You've made it. Super rediculous money them things.

Legendary Digital Networks have made a serious investment for....things I can't talk about yet.

So I'm not like super into Anime or anything.  Yes, I grew up with Manzinger Z and Robotech, and may have built a Gundam model or two, but I certainly can't keep up with everything these days.  That said, many Geek and Sundry fans are also anime fans, ad we ultimately serve you.  I was assigned the task of making an anime show, and it became apparent very quickly that Todd Heberkorn was the only acceptable host.  The rest fell into place, except it was missing a groan inducing pun.  I solved that quickly by naming this show, OTAKING HEADS.

And here's number 3.  This was originally a one off that Geek and Sundry did a couple years ago hosted by Nika Harper.  They wanted to try it as a live format, so I worked the magic I could and well...here it is.  Erika Ishii did a great job with it, and my crew as usual killed it.  Here is GASTRO GEEK.

About 5 years ago I taught Katie Wilson how to fight with a lightsaber. While watching her practice Redondo and Abenico's from Eskrima I immediately thought, "If I ever produce a news show about gaming and tech, Katie should host it with Erika Ishii."
OK, I didn't think that then. BUT when I started casting my show about gaming and tech, I thought that if I cast them as my hosts that they would become best friends pretty fast. 2 minutes after we finished taping GAME ENGINE, the 4th show of Geek and Sundry Open Beta, they in fact became best friends.
Ladies, you were phenomenal. Shout out also to Bruce Wooden and Phill Gonzales for stopping by.

The center of the venn diagram between being a dork and a jock is much bigger than you might think. We set out to prove that with our final Open Beta show, MAX HIT POINTS, a fitness show in the guise of an RPG campaign. Really, there was exactly one choice to host this and that's Blair Herter and his team at Nerdstrong Gym. Also, Becca Scott Kerns is a BEAST doing the Paladin workout twice in one day.