Friends In Your Head | Forums → Off Topic → So... a thing happened.

Topic: So... a thing happened.

Hi folks. It's been a while.

I have some good news, and some bad news.

Sometime last night, GoDaddy encountered a catastrophic hardware failure (I've heard the word "explosion" come up on the internet). We were one of the sites affected by this. It completely took out our server, and it seems that they lost all of our data when they attempted to recover it. It seems a little shady how recovery went down, but that's not the point.

The good news? We have backups of mostly everything. The entire website code, the data for all of the episodes, and Teague has all of the audio files (though at this time, they haven't been re-uploaded). I've uploaded the basics back onto the server, and everything seems to be running okay.

The bad news? We didn't keep an active backup of the forum database. When we migrated to the new server, we knew we would no longer get any free backup services and, due to the fact we weren't going to update the actual site content anymore, we didn't bother to pay for an outside backup to keep things current. We also made a mistake of trusting GoDaddy's hardware to not literally explode, so perhaps that was also a pretty obvious mistake. What this means is that we lost all forum and chat data since November 9th of last year. I'm not particularly happy about any of this, from my general apathy towards the forum lately as well as GoDaddy's miserable failure in providing support to their customers, but it is what it is. I am not going to make the same mistake again and find a way to keep the forum backed up frequently so should something else catch on fire, we can take better care to restore it ourselves.

I want to say that I'm really sorry that we let this happen. I know there was a lot of great content on here that was probably lost, and I feel absolutely terrible that it just up and disappeared without a trace. I hope you guys have a bunch of it still so that you can re-share it. It amazes me how much cool stuff you guys still put out, and I hope this blip doesn't stop that from happening. We'll do better. I promise.

That's all I've got. If we lost any users you guys know of, please let me or Teague know so we can get them set up again.

Also, guys, you've been great. There's only a few of us especially active here, and you really don't owe us anything. It's been awesome to chat and make stuff, and whatever work you've put into this site is appreciated. We aren't entitled to this, by any means. Thank you!

Added couture back; Kibo apparently got in under the wire, 'cuz his account was still there.

Okay. We are deeply sorry about this, folks — I'm rather wounded myself. Not everything we post on this forum constitutes a 'gem,' but some of it is meaningful as hell and some of it sure takes a long time to write, so I expect quite a bit better from us in terms of protecting the work people invest in their participation here. We'll figure out how to prevent this from happening again, and see that it's prevented; in the meantime, my deepest apologies.

Also: Thanks to Holden for stopping to explain all this. My plans spiraled and I ended up AFK for most of the day.

Indeed, thank you guys so much! For a space of time there was the prospect of having *nothing* and my heart sank - last bastion of a pre-social media internet experience. There's only around a dozen of us on here as regulars but y'all mean a lot to me as a community. Thank thank thank you to Holden, Teague, and anyone else responsible for keeping this place going.

Totally didn't spend a good chunk of my day refreshing the page and getting increasingly worried.

Echoing what everyone else has said, y'all are fucking incredible for keeping this going so fastidiously for so long. No worries whatsoever.

Ahhh I am relieved.
I am usually a mere lurker on here (and still listen to WADYM episodes fairly regularly - my commute is long, and familiar voices are nice) but it was scary to think it had all just up and vanished.
Sorry to those who lost quality forum posts in the great GoDaddy explosion of '18. My sympathies.

I another round of good news. I found a way to back up the forum nightly. It'll happen at 1:30am Pacific time (I can adjust this if necessary, let me know if you guys are up that late) and it grabs the whole damn thing so we shouldn't have this problem ever again...

Until godaddy blows away my backups in a freak gasoline fight.

And I'm back in England?!

Guys, as said before, you don't owe us anything. Every day I'm surprised this place keeps existing although the podcast stopped years ago, and it's a forum and so belongs to 10 years ago. The mere fact that there was stuff to lost is proof of your commitment, both of you. I'm forever grateful, and losing a year worth of content, though sad it may be (thinking especially of Writhyn), is not the end. It existed, that's already something.

Nothing to apologize for.

Everything for us to be grateful for.

The forum is dead, long live the forum!

PS: I'm still Trey's pimp, everything's as it should.

So, I'm not a tech wizard, and thus not sure this would help in any way, but the wayback machine did take a snapshot of the site in August, so there's that at least.

Wayback only archived the main forum page for August 2018. The latest for any of the subforums is February 2018. And even then, it didn't actually archive any of the threads, so it probably won't be much help unfortunately.

Still, thanks for keeping the forum running! I'll always be a big fan of the podcast and it's nice that this place exists.

See? The real forum was in our hearts all along...

If anyone needs their DIF/FIYH fix while waiting for the podcasts to be reuploaded, the Wayback Machine actually has the Episode I commentary archived! : https://web.archive.org/web/20111105011 … 09-TPM.mp3

Ah, this would explain why I haven't been able to download any episodes after getting a new phone to continue my beginning-to-end listen of DIF. Thanks for the explanation, Teague! I'll await an update that the audio files are back up for iTunes

If anyone does want any specific episodes in the interim, lemme know—I've got every episode in my library (even New Moon

) and will happily do some Google driving.

Our podcast has a black market for unaired episodes, and I'm deeply amused.

There are unaired episodes?! I would love to have those haha 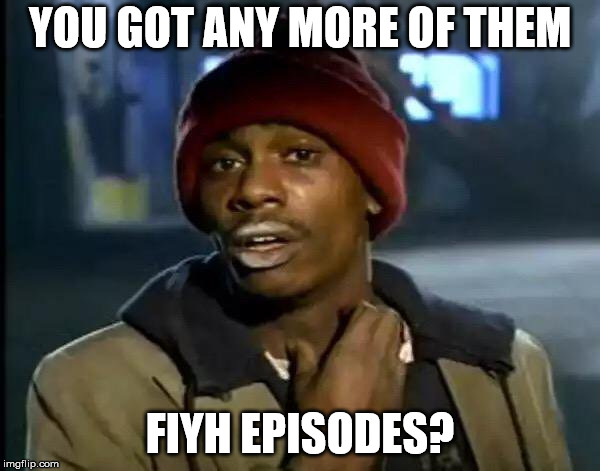 That drive folder has the unreleased New Moon commentary, the Red State and "Yosemite Is Fucking Intense" sub-missions, and the original Harry Potter and the Philocerer's Stone/Indiana Jones and the Kingdom of the Crystal Skull commentaries.

There's also an unreleased Zombieland commentary and — possibly — most of a Green Mile commentary.

I know Zombieland is listenable; I'm not positive I was ever able to recover anything from The Green Mile.

iirc you said Green Mile was missing half an hour and Dead Man's Chest was unsalvageable.

Uploading audio now; episodes should all be online by the end of the day. (Let me know if anything's still missing later.)

Also, here's a few more tidbits for the black market:

Friends In Your Head | Forums → Off Topic → So... a thing happened.