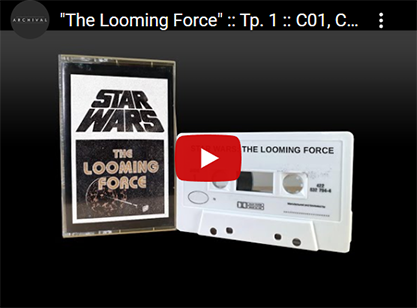 Hey folks. Our own Abbie Phelps and her friend [and occasional FIYH lurker] Nate Grizzle sat down and wrote a better prequel trilogy.

(It's that simple, pitch-wise. They have to be modest; I don't. They did good.)

So, if you were ever wondering what the hell really happened Before The Dark Times — and I mean canonically, folks; this is the good stuff — here's the story.

The playlist button above is the link. Below, some extra words.

This is my second read-through of this book; some of you might have listened to a version-one of this from last year with no music or sound effects. Not to put too fine a point on it, but this is a different (and I think much more engaging) listen. I'm better at some of the terrible character voices, and I definitely understand the story better... but, mostly, it's just riddled with John Williams and Ben Burtt, and the overall effect of 'Star Wars-ness' is much more prevalent here.

These are YouTube videos and not MP3s because I don't have the server bandwidth anymore to drop fourteen hundred-meg files onto a public link and let 'er rip, but if anyone knows of a good alternative for getting MP3s to those who want 'em, I'm all ears. (Myself, personally, I like the YouTube player. Let's me pick my playback speed, and I'm always streaming my audio from the background of my phone anyway.) (Admittedly, YouTube is not ideal, it's just what we're doin.)

These were made, as you'll be able to see, by performing the book while also managing the playback of a bunch of preconfigured music and sound effects choices, arranged in tabs in Chrome. Those music choices often took quite a while to make work, in pre-production; lots of rejected cues, usually for timing reasons. The sound effects work is largely made possible by the RPG/DnD communities, who have prepared all kinds of environments for similar usage. (For all of this, I still occasionally lose control of my whole ship a bit and throw a "fuck" into the manuscript. To be absolutely clear, the "fucks" are not in the manuscript. lol. I tried not to be loose in this, but every now and then it happens. There are also plenty of mistakes; I know. I just plowed through because I knew there'd be no editing and I didn't want to derail the book every four paragraphs.)

To be honest, I'm pretty proud of these, and I'm incredibly impressed by what Nate and Abbie — collectively, I call 'em ""Phrizzle," which is a combination of last names — have done with this trilogy. It's still underway, and even now, this manuscript is still considered a first draft, which they're going to be going back through and re-editing and tweaking once the trilogy's first-drafts are complete.

Even for a first draft, you can tell: They're gonna pull this off. (As I can report from the middle of the third book [which is currently being written], they do pull it off.)

Anyway. It's so much fun to truly like Star Wars again.

As for the viewcounts: These tapes have previously been available only to myself, the authors, and a couple of my buddies; Ruger, Frommeyer, etc.. Honestly, they weren't originally intended to be published — the story of why these new tapes were recorded in the first place is a whole other thing, but it's not very interesting. In any case, there's going to be at least one more version of this audio production, probably sometime mid-decade. They've got 3 to finish, then 2 to tweak, first. We're talking about like a million and a half words, all-in. It's an undertaking.)

These were recorded and released on a weekly basis, like a TV show. The last episode of this was recorded just a couple weeks ago. Now that it's bingeable, and now that Episode II looms, figured it was a good time to drop the first book. If you're hooked, you'll find out more about Episode II programming in the epilogue tape.

While we're wall-of-texting: Thanks, Phrizzle. This was needed. Y'all tasked yourselves as serious people do, and now we all get to benefit from the psychic relief of a better prequels. It's not much, but — you know, it's tons. Great work.

Just a note that Teague's commitment to this stuff is absolutely insane and the fact that he's gotten this invested in the silly thing Nate and I have been writing for the past few years has been a joy. Makes it feel very much worth it to have put all the effort in, so thank-you sir. YOU have tasked yourself as serious people do, and that you did so for this is incredibly just. Wow.

Anyway, I hope you all enjoy Teague's audiobook of our stuff! We're about halfway through the final chapter of the trilogy, after which point we'll be going back, expanding the final draft into something much bigger, and potentially monetizing it, so the work will not be finished anytime soon lol. (Plus, there are some related side projects in other media potentially coming soon... to a forum near you. Oooooooooooooh)

I can be two things.

I've been listening to this now for a month or two on and off - it's great to hear your voice again, Teague, and I've really been enjoying the story. Some very strong choices were made by the authors and it's great to see prequel characters like Maul, Qui-Gon Jinn, Bail Organa, and Padme with the recontextualization afforded by this story. I already like the Jedi of this alternate tale much more than the canon version. Excited to keep hearing and reading!