Just finally making a dedicated thread to throw all of my video and photo work.

A couple photos from a shoot I did with an actor friend of mine the other day.

Would you look at these hands. I would NOT like to get slapped by this man.

You know what they say about a guy with big hands.?

A while back I had the great pleasure and fun of making a new opening video for Bullskit Comedy season 6. This was designed to play at the front of every show. Shot super down and dirty, with a super quick turnaround I'm reaaally happy with how it turned out.

The stats for those curious:
Arrive on location to out of location- 5 hours (While I was pretty debilitatingly sick, I was pretty much pure green by the time we loaded out)
7 days for edit. (Shot on monday night, finished tues the week after)

Huge thanks to Aural for doing the narration!!

I think I'm starting to get the hang of this again.

That was fun, and nicely put together but you could have trimmed a lot from the middle montage, I think the joke would have landed better if you revealed what he was doing after she asks him as you loose the tension with the reveal.

Always look for any heads of tails you can trim this has a fair bit of fat and would have been a lot stronger as a 90 second piece.

Hope the live crowd dig it, theres nothing better than seeing your work in front of an audience!

Although, I would have thought the exact opposite of trimming from the middle, that's the thinnest part of the entire thing I feel (Unless you meant taking the reveals at putting them at the end as trimming?).

Personally, if I had the free reign to, I would have rewritten the opening to be at least half the length, as it is, I already editted out 4-5 lines of dialouge in post. That entire section just feels bloated.

And that's an interesting idea of putting all the reveals at the end, definitely gives it a different feel. But to defend what Riley had written/what I was trying to do, the joke as written was leaning way more heavily on the punch-line of the pun, than the actual reveals of the acts themselves (as written we'd see the joke/reveal in one shot). Which I'll grant you is a feeble excuse at best, and only really works when you don't know the title beforehand.

Ultimately, I think, it stills just comes down to the whole adapting things written for the stage to film, in most cases being hemmed in by the script verbatim. As well as all of the actors being stage actors where the flow and timing is completely different, namely slower. It's something I'm trying to get the cast adapted too, but it's a work in progress.

And it played... alright. Not as well as I hoped. There was some good laughs, but the problem with the space they perform in, is that the acoustics suuuuuuck, so you get any decent amount of laughter and that's all you can hear. So most of the verbal jokes/reveals get paved over by laughter and get missed. -shrug- ah well, way it goes.

I do a lot of random general life ones on my personal/LP channel Teague. Started it as my may project.

But yeah, I'm going to try to do a lot more of the In Development ones for the next 3 films since I'm not MAD PANIC LAST MINUTE SCRAMBLING to get them organized.

A couple of pics from a sssuuupppeeer impromptu headshot/portrait shoot I did with my friend Nicole.

given the framing of that middle one, I fully expect some kind of monster to come running up into view from behind the middle rise.

Random photo I took on the shoot today.

BTS photo from the set of Repair: 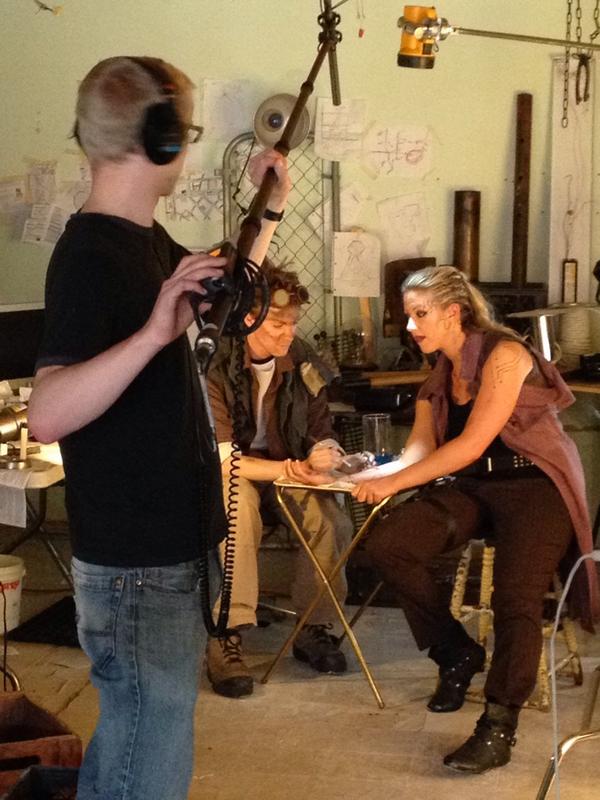 I love the flashlight on a boom.

Yeeeaaah, funny story. Our location didn't have any power on the day.

We were able to run a (single) cable from the hallway outside due to the kind graces of the restaurant next door. So this entire set was lit with one work light, 2 fluorescent desk lamps and 2 LED flashlights.

And it worked....for the most part.

We will be rolling out the short films in higher quality on the Bullskit Comedy page over the next little bit if you want to see them in thier full and proper glory!

Another photo from the set of Repair:

We will be rolling out the short films in higher quality on the Bullskit Comedy page over the next little bit if you want to see them in thier full and proper glory!

Another photo from the set of Repair:

Too many links... Though I swear my friend in syracuse is the bald bearded guy... calling him as we speak.

I apologize that the three videos I posted containing work I'm proud of in a thread dedicated to sharing my work offended and overwhelmed you so. If there's any way I can ease the obvious pain you suffer at my expense, please do not hesitate to tell me.

I apologize that the three videos I posted containing work I'm proud of in a thread dedicated to sharing my work offended and overwhelmed you so. If there's any way I can ease the obvious pain you suffer at my expense, please do not hesitate to tell me.

What pile of rubbish. My oh my. Apologies was sonot needed! It's amazing. Deal with it.